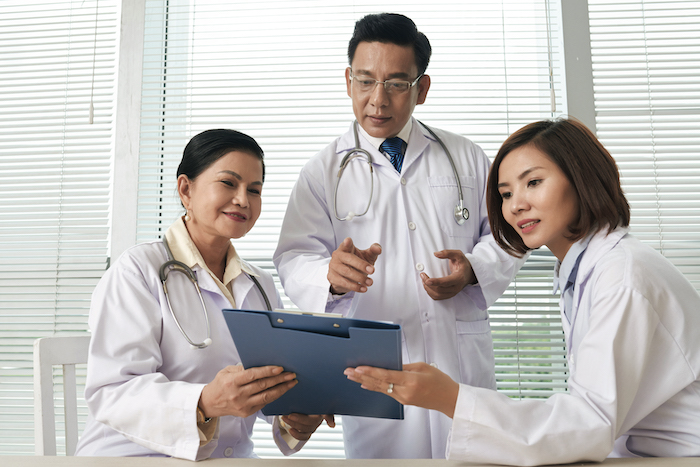 Revolutionary advances in the field of Haematology since the mid-1990s have led to better treatment outcomes, says Dr Teo Cheng Peng, Senior Consultant, Haematology. In the Open Dialogue with PCC Haematologists webinar, he is joined by the PCC Haematology team as they discuss the 3 common blood cancers: leukemia, lymphoma and multiple myeloma.

Haematology is the field of medicine relating to blood disorders.

Dr Colin began the dialogue with a talk on leukemia. He started by explaining the function of the bone marrow, or the blood “factory” of the body, which produces bone marrow stem cells that in turn form blood cells in the circulatory system.

Unfortunately, any one of these cells can become cancerous, explained Dr Colin.

The stage, development, and type of cell that becomes cancerous determines the type of blood cancer it will become. In leukemia, the cancer cells or the leukemic clone grow uncontrollably and prevent the normal function of the bone marrow.

Dr Colin emphasised that in this era of rapidly developing therapies, we need to remember that unlike novel treatments, the standard of care has a long track record of balancing risk and effectiveness, with known long-term side effects.

A general guide for how leukemia is treated is to give treatment that will kill as many blood cancer cells as possible, followed by maintenance of response. For chronic leukemias, oral targeted therapy is given so that patients can eventually lead normal lives while on medication. For acute leukemias, stem cell transplant (SCT) will need to be considered.

Generally, the role of autologous SCT is to recapitulate the hematopoietic system and immune system. In comparison, the role of allogeneic SCT is to form normal cells as well as kill small amounts of leukemia cells once donor stem cells mature in the body.

One of the more recent developments in blood cancer treatment is CAR T-cell therapy. CAR T-cell therapy involves taking T-cells from the patient and modifying them in a laboratory setting to get them to recognise certain targets on certain cancers. Once this process is ready, these cells are re-infused into the patient.

Dr Colin noted that although CAR T-cell therapy is expensive and has caused deaths in early clinical trials, doctors now know how to preventively treat patients such that severe complications are minimised. While CAR T-cell therapy has shown to be effective, he reminded participants that it is a targeted therapy that can only be used for specific types of cancers. Currently, there are only two approved indications for CAR-T cell therapy: B-cell acute lymphoblastic leukemia and large B-cell lymphoma.

Dr Dawn continued the dialogue with an overview of multiple myeloma—a blood cancer originating from plasma cells, a type of white blood cells which produce antibodies that protect the body from foreign antigens.

When these cells turn cancerous, they grow uncontrollably and form tumour masses which eventually destroy the bones. Bone marrow production is affected and patients suffer from low levels of blood cells. At the same time, cancerous plasma cells do not produce normal antibodies, causing patients to suffer from low immunity.

In Singapore, there are approximately 100 cases of multiple myeloma per year (2 per 100,000 of the population). Though incidence is low in young adults, it increases in age, peaking around 65–75 years old, with slight male predominance.

Dr Dawn explained that in its early (monoclonal gammopathy of unknown significance (MGUS)) and intermediate stages (smouldering multiple myeloma), patients may remain well with no symptoms and low levels of cancerous plasma cells.

This can go on for a few years until it eventually progresses to clinically significant multiple myeloma. As a result, many cases are already clinically significant when they present to doctors, with symptoms related to the condition. These include symptoms related to: destruction of bones, especially in the spine (e.g. bone pain); disruption of blood cell production (e.g. anaemia); and abnormal proteins in the blood and urine (e.g. kidney failure).

Diagnosis of multiple myeloma is usually done with a bone marrow biopsy; a study of plasma cells under the microscope; the detection of genetic abnormalities of plasma cells; and abnormal proteins in blood and urine tests.

Multiple myeloma is usually treated with the aim of symptom control and achieving prolonged remission. Dr Dawn added that treatment should be supplemented with supportive care for holistic cancer management.

Currently, the definitive treatment for multiple myeloma involves killing myeloma cells with combination therapy—noting that chemotherapy is limited to certain turnpoints of the disease, while new classes of treatment like targeted therapy, immunomodulatory drugs and monoclonal antibodies are more commonly used in combination.

Typically, patients can receive treatment as an outpatient, and treatment is usually well tolerated.

To end her talk, Dr Dawn concluded that outcomes have improved tremendously and new drugs are being developed rapidly, offering balance between quality of life and effectiveness of treatment, with possibility of prolonged remission being achieved—making the management of multiple myeloma similar to chronic disease.

Lymphoma in 2021 and the future

Dr Lee Yuh Shan continued the dialogue with a last talk on lymphoma—a type of blood cancer involving the lymphatic system of the body.

Diagnosis of lymphoma usually involves a lymph node biopsy, biopsy of the skin or any other involved organs, bone marrow biopsy, PET-CT scan and flow cytometry among other tests to improve on diagnostic yield.

Generally, combinations of antibodies, chemotherapy and checkpoint inhibitors are important in the management of Hodgkin’s lymphoma, while certain types of B-cell non-Hodgkin’s lymphoma such as follicular lymphoma can be managed with chemotherapy-free regimens. Stem cell transplants are usually reserved for second line treatment when patients have relapsed or refractory disease which did not respond to conventional chemotherapy.

Dr Lee ended his talk by reminding patients that with new developments in lymphoma treatment, personalised treatment that takes into consideration disease status, mutation of tumour and fitness of the patient, remains important.

5 Q&As with the HPCC aematology Team