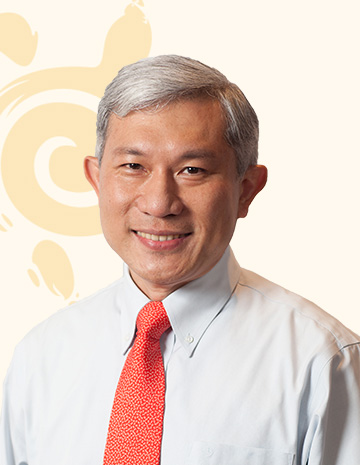 Dr Khoo graduated from the National University of Singapore and received his training in Internal Medicine and Medical Oncology at the Singapore General Hospital. He was awarded the Singapore Government HMDP fellowship in 1993 to pursue advanced training and research in breast cancer at the Memorial Sloan Kettering Cancer Centre in New York.

Before Dr Khoo moved to his current practice, he was a Senior Consultant and Head of Department of Medical Oncology at the National Cancer Centre (NCC). He was the founding Director of the Division of Clinical Trials and Epidemiological Sciences.

Dr Khoo is a member of the American Society of Clinical Oncology, the European Society of Medical Oncology and a fellow of the Royal College of Physician in Edinburgh. He was President of the Singapore Society of Oncology from 1998 to 2000. He also served as the Assistant Master – Administrative Affairs in the Council of the Academy of Medicine, Singapore from 2015 to 2020. Dr Khoo presently sits on the Medicine Advisory Committee in the Health Sciences Authority as its Deputy Chairman.